On Friday 25th September, OCWE held its first of a series of ‘Soup and Sandwich’ evenings. It was felt the evening was a great success, the more informal approach leading to a pleasant and relaxed atmosphere. Some ‘new’ people turned up who had not been at the previous events and they all seemed really keen to spread the word to their friends. Perhaps the most important factor about the new people was that they all had connections with Elland. The Elland Co-op were very generous in supporting the event both with a large donation of food and with support for the staffing of the event. They have also generously offered support with the October event – for this we would like to offer our thanks. 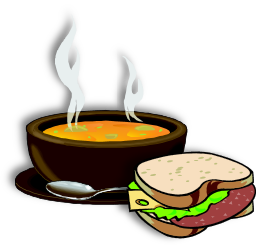 Following on from the event, a meeting was held to both review the evening and plan for an event to be held over the Christmas period. It was felt that the ‘Soup and sandwich’ event should be repeated in the same format on the 2 further occasions already pencilled in, 23rd October and 20th November. Plans were also made for the Christmas event. This time it was felt we should aim the event at families, providing a buffet-style meal and entertainment, along with an appearance by a certain gentleman wearing red (as long as he is not too tired out by his work on the 25th December!) The event will be held at Southgate on Tuesday 29th December at 1pm. We are hoping the launch of the Elland Food Bank in October will provide links to families who may benefit from this event.

OCWE was always intended to be a Christian response to the needs of those around us in Elland and not just the response of one church or denomination. It is a source of great encouragement to us that there are now people involved from 4 of the Elland churches and that, whilst Southgate does provide an ideal base for the events, it provides a chance for Christians to bear witness to the love of our God in really practical ways, alongside one another, regardless of tradition.

The planned events are:

All the events are at Southgate and, as always, we would ask for your prayerful support.