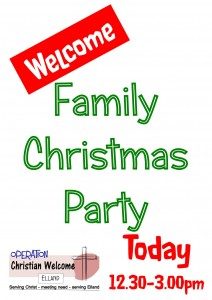 The OCWE Christmas Party for families took place on Thursday 29th December. This event has now taken place for the last 3 years and numbers have continued to increase. Last year there were 35 people in attendance, with 22 of those being children. This time we had 30 children and an overall attendance of 60. The meal was provided as a buffet and we also had party games, films and a visit from Father Christmas, who had delayed his annual post-Christmas holiday to be with us.

We are pleased to announce that OCWE has received a grant of £470 from the Elland Staying Well Project, for which we are very grateful, as it takes a lot of pressure off the finances. This will now keep the project running until at least December 2017. We could still do with more help on Friday evenings from 5pm onwards if anyone is willing and available. The next Soup and Sandwich event is on Friday 27th January 2017.